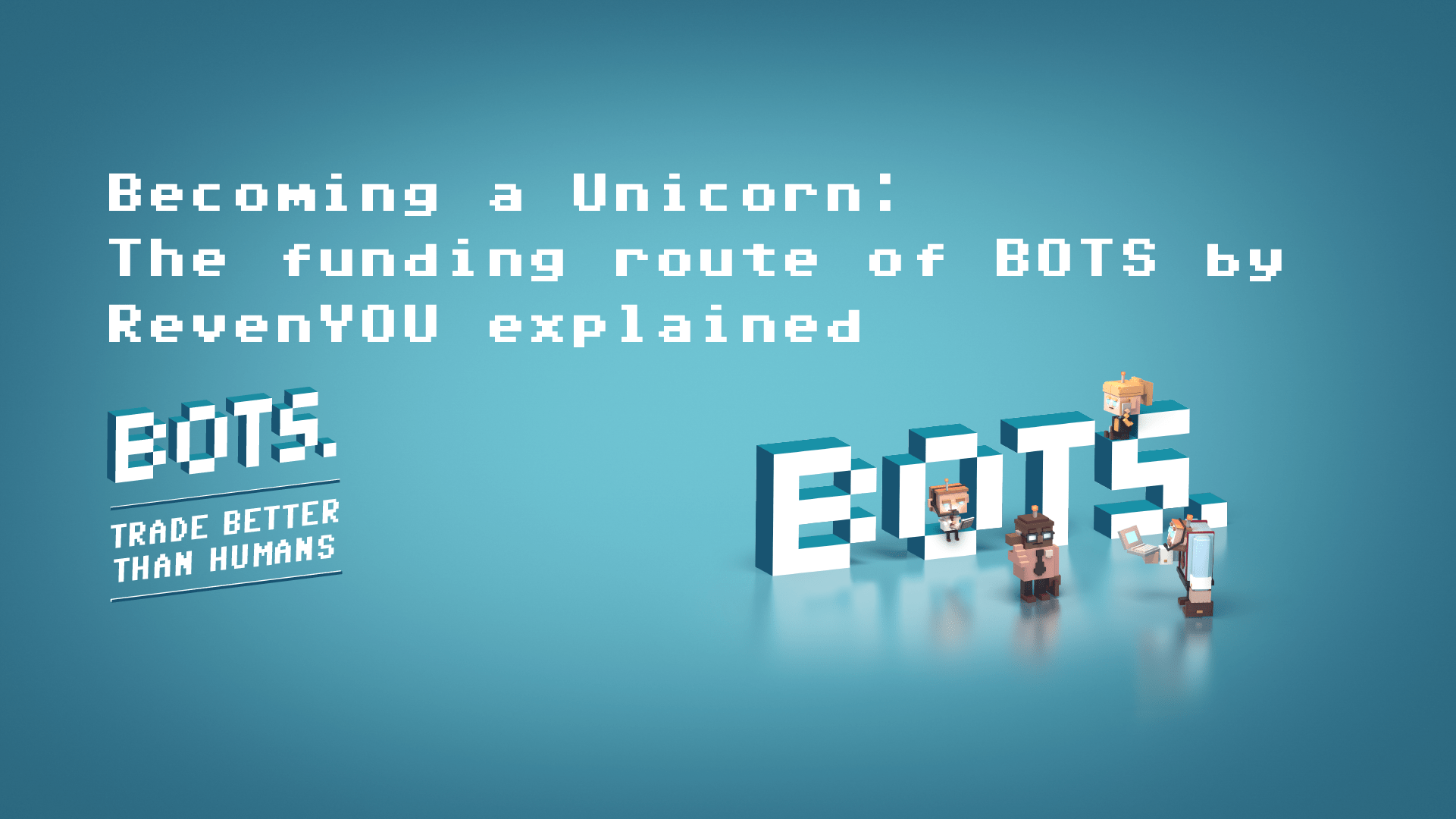 Every startup that is going to acquire capital, goes through a number of phases with corresponding milestones. This is no different for BOTS by RevenYOU. We distinguish the following phases within our organization:

In 2017, Colin Groos (CCO of BOTS by RevenYOU) shared his idea with Michiel Stokman (CEO of BOTS by RevenYOU). Colin wanted to program a trade strategy. An algorithm to achieve more returns from his investments. In Excel, Colin and Michiel designed their first algorithm together. Their first automated trading strategy. This strategy would yield a huge return. At least in Excel. The first bot was born.

Both gentlemen were convinced of their idea to start trading automatically. Through their network they came in contact with Stefan Bijen (CTO of BOTS by RevenYOU). He programmed the algorithm that Colin and Michiel had worked out. They could start trading.

In the real world, the algorithm designed by Colin and Michiel, did not do as good as their expectations. Therefore they concluded: Investing with algorithms definitely has the future, but there are people who probably write better algorithms than they could do themselves.

Via Cryptotrader the men came into contact with a trader who could double his return on a monthly basis through an automated strategy. After convincing evidence from this trader, his trading strategy was purchased. A bot that worked the way they had planned.

Initially Colin, Michiel and Stefan wanted to share this strategy with friends and family. And that is where they faced a problem. To trade with such a bot, requires a lot of technical knowledge. Knowledge that not eveybody has. Why not make this easier for everybody? And so the solution to this problem became their new idea

The idea: a platform on which expert developers offer their bots that the user can use (without technical knowledge) for automated trading. Spotify for investing. BOTS by RevenYOU was born.

The idea was quickly turned into a business plan, and because the business model looked so good, it seemed to make sense to involve an investor. BOTS by RevenYOU came to an agreement with an investor for € 650,000 against 25% of the shares.

The energy to start working on this idea was enormous with everybody involved. With this platform the world of trading could be turned upside down. The best trading strategies would now become available not only for the richest 1% of the world, but for eveybody. Everybody could have the opportunity to set up a second passive income.

The payment that the investor had promised never came. For whatever reason. It was actually a blessing in disguise, because this strengthened the founders of BOTS by RevenYOU in their believe that they had to keep going forward.

Financing was provided with the help of family, friends and other interested parties. €650,000 against 18% of the shares. The invested amount was spent on building a prototype and building the app.

Just like with all start-ups, not everything came naturally. Being an entrepreneur, coming up with ideas and making something, never goes smoothly and without any struggles. There are always obstacles on the path of an entrepreneur that must be cleared.

To overcome those obstacles, it was decided to organize another investment round. This time it would be accessible to a larger audience: a crowfund.

The crowdfunding was a huge success. Within a very short amount of time, € 1.6 million was raised against a valuation of € 32 million. The presentation of BOTS by RevenYOU at Business Class by Harry Mens certainly made a very positive contribution to this.

For us, one of the biggest challenges in this phase was the KYC — Know Your Customer —module. A module that had to be built to comply with laws and regulations of the Dutch government.

The proof was there: BOTS by RevenYOU will be successful. In order to advance tot he next phase, new investments were needed. To do so, Harry Mens was visited once again.

The pre-series A phase

On December 8th 2020, RevenYOU visited Business Class for the second time. All expectations that the founders had for this new round of crowdfunding were exceeded. Within two weeks, € 2.2 million was raised through crowdfunding. When this second investment round finally closed on January 31st 2020, a total of € 2.65 million was raised against a valuation of € 48 million.

The lesson from Michiel, Colin and Stefan: Dare to think big!

By focusing on € 650,000, they actually made it happen. By focusing on a valuation of € 50 million, they can now state that this is the current value of BOTS by RevenYOU.

The next focus is the next phase. BOTS by RevenYOU will become a unicorn within 3 years.

The serie A phase (The Unicorn)

BOTS by RevenYOU is not yet a Unicorn, but will certainly be one within three years. A Unicorn is a designation for a tech startup that, through investments and funding, has reached a market value of at least € 1 billion.

In almost all cases, these companies are all about disruptive technology. For example: Airbnb, Uber and Dropbox. BOTS by RevenYOU will complete this list in 3 years’ time.

The holy grail for all startups is to become an IPO. An Initial Public Offering. If an organization has a market value of Є6 billion euros or more, we call it an IPO. This phase is still out of sight for now. But the lessons learned also apply here: Dare to think big.

For now, the focus of BOTS by RevenYOU is on becoming a Unicorn.

Trading is for everybody

The rich get richer and the poor get poorer. That seems unfair and we want to change that. The disruptive technology and approach of BOTS by RevenYOU will turn this tide. Anyone with a smartphone will soon have access to smart bots that trade on the stock market. Because BOTS by RevenYOU is going to help millions, or maybe even billions of people, we will do everything, with your help, to make a Unicorn out of RevenYOU.

Do you also want to contribute?

Eveybody must be able to trade. And now this is possible. With BOTS by RevenYOU. Together we will make the world of trading more fair and more transparent. Are you interested, but your question has not yet been answered? Then have a look at the English FAQ’s on our website. Or contact us, we are happy to explain it to you personally.

You can now download the beta version of the app from the playstore. For the ios app you can visit our website. Download the app today and get an exclusive look into the new world of trading. Help us in the test phase and be the first to get access to the best bots.

Risk-free trading does not exist. You can lose (part of) your stake.