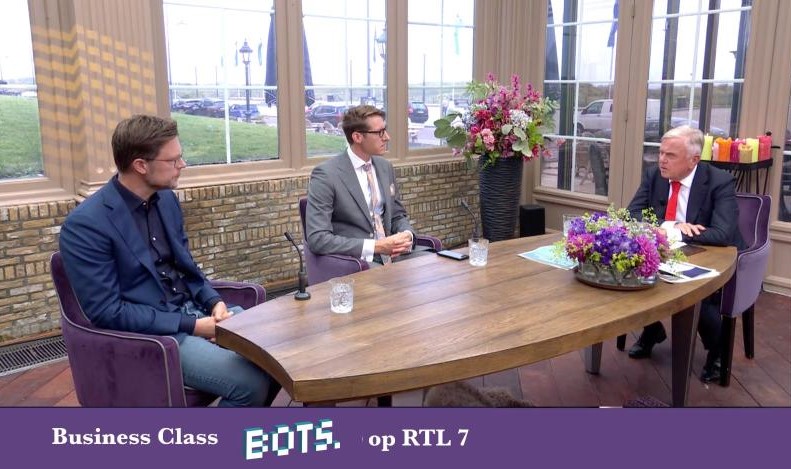 Last Sunday, Michiel (CEO) and Colin (CFO) were guests of Harry Mens in Business Class for the introduction of the new crowdfunding round. And that was a great success.

BOTS by RevenYOU has had two crowdfunding rounds since it was founded. After the closing of the last round, on January 31, 2020, we had raised € 2.65 million at a valuation of € 48 million. A result that we are very proud of.

The third crowdfunding round started last weekend. Before the start of this new round, Michiel and Colin joined Harry Mens in Business Class. The registrations poured in after the show was aired. At the end of the day, BOTS by RevenYOU recorded 300 registrations and new registrations are still coming in daily.

Investing in BOTS by RevenYOU

“When you sat at the table with me last year, I also invested,” said Harry Mens, “and my investment has become 100% more valuable. That never actually happens. Not even in real estate. ” Good to know that Harry Mens is enthusiastic and is also investing in BOTS.

To give potential investors the opportunity to get acquainted with BOTS by RevenYOU, we are organizing two roadshows in the Van der Valk hotel in Haarlem. The first one was last Tuesday and the second is scheduled for Thursday, July 9th. Both road shows start at 3:30 PM.

More information about the opportunity to invest in BOTS can be found here.

The BOTS app is growing

Since the commercial go-live last May, the number of users of the app has grown to 18,000. We already published this article about this earlier. Michiel “That is an amazing result and it just goes to show how easily scalable the app is.” This summer, the BOTS app will roll out to 18 other countries and grow to 178 countries in the end.

The BOTS app is different from normal trading or saving. Trading is done by so-called “bots. Bots are automatic investment strategies. Normally these are only used by professional parties such as Flowtraders. It is unique that normal citizens now have access to these bots. ”

The future of BOTS by RevenYOU

The goal of BOTS by RevenYOU is to have a valuation of € 1 billion over 3 years in order to join the list of Airbnb, Uber and Dropbox. In addition, the main goal is, and remains, to turn the world of trading upside down. It has to become more fair, more transparent and more user-friendly. If it is up to BOTS, everyone in the world has access to a second form of income. Investing will soon become as normal for everyone as watching series via Netflix and listening to music via Spotify.

“BOTS by RevenYOU wants to provide fair trading for everyone in the world so everyone is able to build a second income. We do this by building the most accessible and user-friendly platform for automated trading. ”

Trading is for everyone

Everyone must be able to trade. And now you can too. With BOTS. Together we will make the world of investing fair and transparent. Are you interested, but your question has not been answered yet? Take a look at the FAQs on our site. Or contact us, we are happy to explain it to you personally.

The BOTS app is now live

Risk-free trading does not exist. You can lose (part of) your investment.