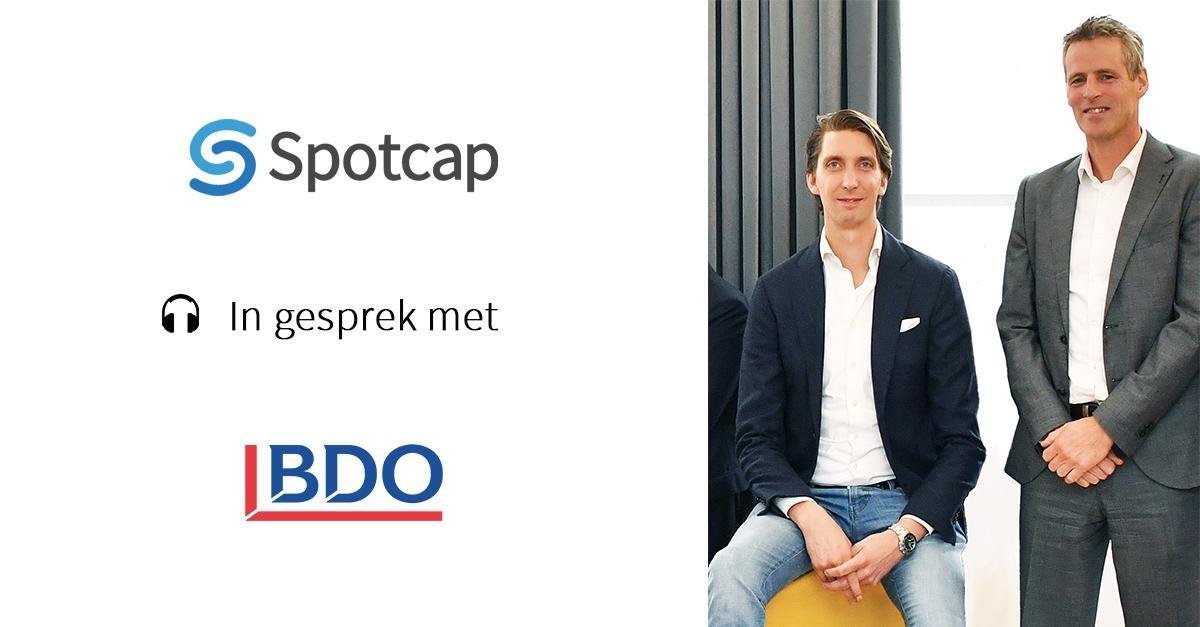 The interview covers how Victor deals with the current situation at BDO, the changes in demand he currently sees, and his outlook for the future of the financial market.

Rik: Welcome to this Spotcast! You may know me from the previous edition, my name is Rik and I’m responsible for Spotcap’s partner network. Today we’re meeting with Victor Verstappen, Partner at accountancy firm BDO. Victor, would you like to introduce yourself?

Victor: Sure, Rik, thank you. My name is Victor and I work at BDO, an international accountancy firm. Today I believe we work with over 80.000 employees worldwide. In the Netherlands alone we are represented by around 2500 employees. We handle accountancy, taxes, and advisory for our clients. The advisory branch is split up into multiple divisions.ne of them is mergers and acquisitions (M&A), which is my department. I work in debt advisory specifically, which is also where our paths crossed at one point.

Rik: How is the situation for you at the moment? Are you working from home or are you able to go to the office?

Victor: It’s a bit of both actually, there is some capacity in our offices but still not much. However, we are able to manage just fine; we have digitized everything and do not actually need to meet clients face to face either. It’s just the matter of not being able to work with colleagues and clients in real-life, which is still manageable but less convenient. I do miss having those personal contacts.

Rik: I don’t think you’re the only one. It can be frustrating indeed. So looking at the current market situation we see a lot of different views spreading around, many are speaking of the great impact that our government measures have had, and how the economy is returning to its former state, but others are worried about a major recession. What is your view on that?

Victor: Personally, I’m somewhere in the middle. It is now clear that the government measures have indeed had a positive impact on the businesses and the economy, and the liquidity need is being covered quite well. However, there are a lot of businesses that will eventually be impacted by this and will need to adapt to their new situation. This will probably cause some social disruptions too, such as layoffs and bankruptcies. I don’t see this recession turning into a so-called V-shape, but I’m also not as negative as some messages are. I’m somewhere in the middle.

Rik: That makes sense. I suspect bankruptcies and layoffs will most likely be spread out over the coming period.

Victor: Yes, because businesses in ‘risky’ industries such as tourism and hospitality are now still running on schemes and arrangements such as deferment of tax payments and the NOW arrangement.

Rik: Do you see them extending the NOW arrangement to, let’s say, a version 3.0?

Victor: I really can’t tell. Should there be any new kinds of arrangements, I expect those will be leaner and more targeted to those who really need them. That being said, I do believe that the government might impose more stimulating measures in the future to motivate businesses more. And that would eventually boost the economy as well.

Rik: That would certainly be a good thing. So working in debt advisory, what do you see happening there in terms of financial solutions? Have you seen different types of applications coming in over the past few months?

Victor: It fluctuates. Some businesses, for instance in flower cultivation, have been hit hard and are now climbing back up. Others are growing fast and are in need of funding. We also still see applications coming in from businesses that failed to raise funding with the banks like we always did. And then we see a moderate amount of applications for the new government schemes such as BMKB-C, GO-C, and KKC, although not as many as we expected from the start on. That is probably due to the fact that liquidity issues always run behind on business results, so the problem usually starts being evident months after a crisis. That’s why I’m expecting the real peak after this year’s summer.

Rik: Fair enough. What do you think about the way the government schemes have been set up? Do you think they did well?

Victor: It’s not really a fair comparison, but I do think the government has acted fast and decisive, which is impressive. The schemes currently available are quite well balanced out, meaning that unhealthy businesses aren’t being funded and the banks’ risk appetite remains the same. That’s well done in my opinion. Then, on the other hand, application processes for any kind of government scheme tend to take up a lot of time and paperwork. In that way, they are still bureaucratic processes with longer turnaround times. For that reason, I really appreciate that non-traditional lenders such as Spotcap have been accredited for the scheme as well.

Rik: That is something we are very happy about, too. I have to say that, being a fintech company, we needed some time going back to the more traditional ways of working, but we are adjusting better and better. I’m sure that only good things will come of this and it will help to mature the entire financial system.

Victor: I’m sure of that.

Rik: In this corona situation we’re currently dealing with, are there any specific challenges you’re seeing at BDO?

Victor: For our regular accounting services I would say it’s business as usual. We do see that the demand for solutions for more intricate accounting issues and strategic trajectories is dropping, but we’re not making any losses in terms of revenue. At BDO we are now solely exposed to the loss of clients due to bankruptcy. For that reason, we do monitor our clients’ payment behavior more closely than usual.

Rik: Looking at new opportunities, do you now see more clients coming in because of new challenges due to the corona outbreak?

Victor: The advisory branch has its core business clients, there isn’t much new that is happening there. But the demand from clients did change as a result of the crisis. For instance, we see more demand for guidance and supervision during these times and less so in advanced fiscal structures. This results in a different mix of services.

Rik: What is your outlook for the financial services market itself?

Victor: Businesses are taking on more debt in these times, whether that is through government-backed loans or through friends and family. These debts have to be repaid in due time, which will change the dynamics of our economy after the crisis. After all, any cash remaining in businesses will be dedicated to repayments, and not to major investments. In my opinion, the government needs to impose new fiscal measures that will allow businesses to maintain a healthier debt/equity ratio. So my hope is that more equity will be provided, backed up by supporting fiscal measures.

Rik: Has this crisis affected your future outlook for BDO?

Victor: I think technology will become even more important and digitalization will happen even faster. I also think the way we’ve set up supply chains will change. For example, look at what happened these last few months with businesses that were completely reliant on imports from China. I don’t think that will happen anymore after this. I think it will lead to different risk and return considerations and that will lead to different business models and logistic structures.

Rik: Which, of course, BDO is happy to support their clients with.

Victor: Definitely! Structuring, digitalization, optimization, that’s what we are here for.

Rik: Great, that’s good to hear. Then lastly I’d like to ask you: do you have any tips or tricks that helped you and/or BDO through these last months?

Victor: Try to keep an overview and see the big picture in all the chaos. Panic is a bad advisor.

Rik: I’ll take it! Thanks, Victor.

Victor: Thank you, I really enjoyed our conversation.

Stay tuned for the next interview or start listening to our Spotcast series here (Dutch only).

Vox Pop Report: Leap into the Future of Banking
Yolt’s open banking technology powers robots in partnership with Nidaros
Digital banking 2022: the way to customers’ hearts is through data