Martha Southall, Economist at CMSPI, presents three key lessons from Australia that US and European merchants need to hear before navigating their own BNPL strategy

Over recent months, Buy Now, Pay Later (BNPL) has flooded the headlines. Retailers across the globe have watched as suppliers scramble to take a slice of the BNPL pie, from strategic acquisitions by the likes of PayPal1 to newly built solutions from fintechs and traditional players alike.2 However, the trend isn’t new to everyone. Home to BNPL giants Afterpay and Zip Co, Australia’s market for this form of retail finance is one of the most mature globally. In this article, CMSPI selects three key lessons from Australia that US and European merchants need to hear before navigating their own BNPL strategy.

According to Worldpay, Australians made 10% of their ecommerce purchases via BNPL in 20203 – a figure that BNPL suppliers suggest could be much higher. However, as Figure 1 shows, this usage was not evenly distributed throughout the population, with BNPL enjoying disproportionate popularity amongst 18–39 year olds.

Many BNPL providers are well known for targeting these younger cohorts5, so what’s the problem? For merchants, the concern lies in the other line in Figure 1, which shows that BNPL usage mirrors that of debit cards by age cohort. That means BNPL options (despite being credit products) often replace debit payments in a merchants’ payments mix. In Australia – just as in Europe and North America – accepting debit payments can be significantly cheaper for merchants, meaning there can be two cost effects of accepting BNPL: one arising from its higher headline rates, and the other from the displacement of low-cost alternative payment methods. Both effects must be quantified and balanced against any revenue benefits to ensure that BNPL is implemented optimally.

There may be broader industry changes at work, too. In fact, in Australia, merchants fear they may be witnessing a shift away from debit from the banks themselves. Commonwealth Bank’s StepPay BNPL product, for example, is treated as a credit card for the purposes of merchant fees despite being interest-free for consumers. Responding to StepPay’s launch in a recent interview, PSG’s Bradford Kelly said of the product: ‘If you move debit customers to credit, you can make more interchange revenue. […] This is a debit card killer.’6

Although the most recent generation of BNPL contenders emerged in the ecommerce environment, in Australia they haven’t stopped there. Through either e-wallets7 8 or physical cards, Australia’s BNPL providers have been inching their way towards in-store retail through partnerships with more established players. The same pattern can be seen globally, with Sweden’s Klarna launching its own bank account in February 2021.9

As BNPL steps in-store, however, its hybrid role as payment-method-turned-marketing-platform becomes increasingly difficult to reconcile. For example, CMSPI has observed instances of BNPL providers requiring merchants to enter unilateral agreements to accept their in-store cards – an arrangement that would be highly unusual with any traditional issuing bank. These unilateral agreements can place BNPL cards’ average acceptance fee significantly above other in-store options. Expansion from the checkout to the POS is therefore a significant concern for merchants, particularly for a payment method that’s already typically the most expensive to accept. 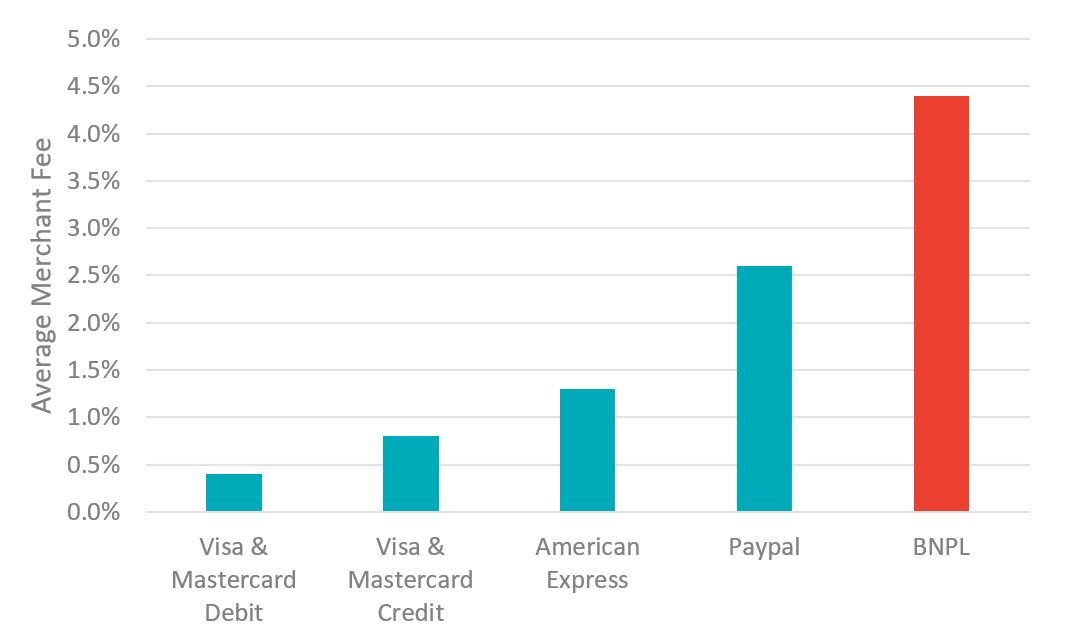