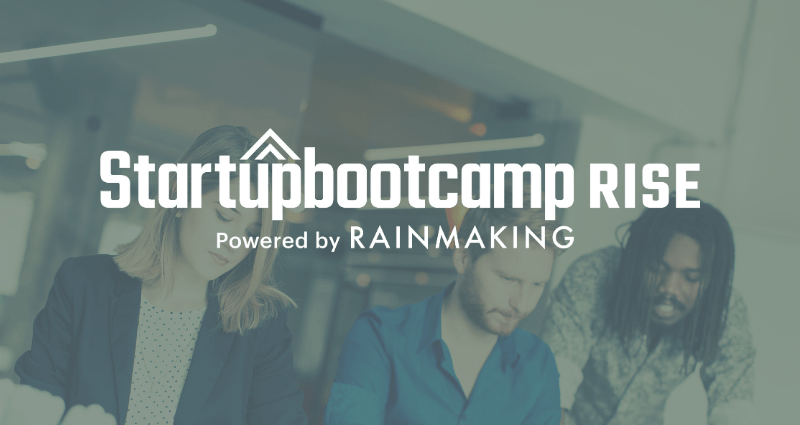 7 July 2020, London, UK: Rainmaking, a corporate innovation and venture development firm, and parent company of Startupbootcamp, one of the world’s largest accelerators, today launches ‘RISE,’ a 20 week virtual accelerator focused on helping corporates empower their departing talent to build their own startups. Rainmaking’s mission for the programme is to enable one million out-of-work people to launch their own startup within the next two years.

The International Labour Organization has warned that 430 million enterprises are at risk of “serious disruption” and nearly half of the global workforce are at risk of job losses.

RISE has been developed to enable corporates to offer an alternative path to mass redundancies, by enabling its people to take charge of their future by building it themselves. It will be launched globally, with view to securing partnerships with leading corporates and governments. Rainmaking’s mission for the programme is to enable one million out-of-work people to launch their own startup within the next two years. Corporates participating will be able to actively support their departing talent to help them build their future and in the process create new value for the company through positively impacting their people, their brand and the wider economy.

RISE is based upon the proven methodology of Startupbootcamp, which has run 80 cohorts and accelerated 877 startups. These startups have created 4177 jobs and raised over $800m in funding. Startupbootcamp was designed to improve the 10% survival rate of early stage startups, of the startups that have graduated Startupbootcamp – nearly three quarters (74%) are still active or have exited.

“Companies faced with these difficult decisions about their people want to live their values and help their talent successfully transition into a new career as fast as possible. Yet the available options are limited to a few traditional services such as career coaching, which aren’t adequate for this new world. There are few genuine alternatives that offer a pathway that is unique, exciting and genuinely adds tangible value for the people impacted, their company and the local government.”

“This is why we created what RISE, so companies can offer a new pathway, governments can begin to rapidly kickstart the economy and the departing talent are empowered to create their own future. Times of rapid disruption provide opportunities for new startups to take advantage. We have the perfect mix of rapidly changing consumer needs, current incumbents unable to respond at the necessary speed and probably the greatest influx of talent into the job market since the dotcom boom in the early 2000s. All of this opens up new market opportunities.”

As well as offering an intense 20-week training programme, RISE will give the startups access to early stage VCs, angel investors and over 100 carefully selected mentors with a wide range of expertise across multiple industries, who can provide hands-on support and valuable introductions. It also offers more than $550K+ in exclusive partner deals from leading technology and wellbeing providers such as Amazon, 7 cups, HubSpot, SendGrid.

Rainmaking has launched 29 ventures worth over $2BN in value, including one of the world’s most active global investors and accelerators, Startupbootcamp. Since 2006, they invested in nearly 900 startups who went on to raise almost $1bn. Rainmaking has partnered with 10% of the Fortune500 companies to bring new strategies and market-based solutions including IKEA, VISA, Airbus, Engie, HSBC, Jaguar among others. They are also a proud member of the UN Global Compact, driving major initiatives on a broad spectrum of social and environmental impact issues.