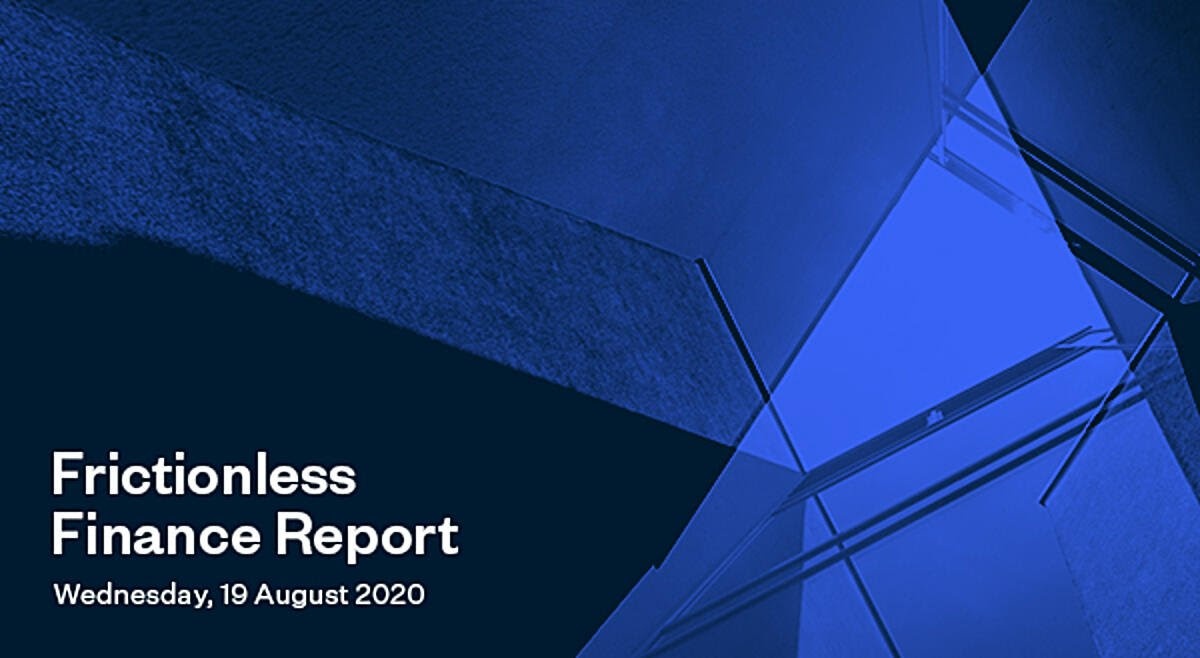 Welcome to the Frictionless Finance Report, our monthly look at everything new in the world of Open Banking, FinTech, and consumer experience. This month we examine the intertwined relationship between the global pandemic, the case for Open Banking, the challenges faced by FinTech firms, and the response of the financial sector.

We have delivered extensive coverage of how Open Banking can support both consumers and business through the Coronavirus pandemic. As government relief schemes, both in the UK and worldwide, begin to taper down, it is more important than ever for all available resource to be used to stop global economies stagnating.

In this month’s Frictionless Finance Report we have considerable coverage of how Open Banking can support consumers and business across the globe.

Payments Journal kicks things off for us this month, giving us an insight into the importance of Open Banking and APIs. The make particular note of the fact that businesses need to streamline their operations, but that this can be achieved through automation and the use of APIs.

This theme has been picked up and continued within the pages of Crowdfund Insider and P2P Finance News. They argue in their articles that Open Banking will be critical for industry within confines such as customer onboarding and credit reporting. P2P Finance News also make the valuable point that assessing applicant creditworthiness quickly and accurately will give lenders further security to lend where required.

As furlough schemes are slowly phased out, it is likely that we will see a rise in the volume of individuals requiring credit facilities. Open Banking and bank data will be of importance in giving confidence to lenders in their decision making.

Finally, Silicon Canals also make the case for the importance of Open Banking in the Covid world. Important for them was the gradual disappearance of cash, making the drive towards digitialisation more important. They too, make similar points about the impact on the customer journey, noting that paperwork may well have seen its day, while also noting that the pandemic has led many to make the move to working from home a permanent one. They state:

AI and Open Banking are opening the gateway to a more efficient and effective financial sector. With the drive to become an increasingly cashless society, COVID19 has put the spotlight on digitalisation, encompassing the reality that businesses have to keep up by providing the best technological solutions and services if they are to keep their heads above water in a time of turmoil.

In their blog, Datamatics have outlined some of the advantages that Open Banking provides to the financial industry, including, driving innovation, building customer trust and offering a competitive advantage. Of interest, they note some of the important FinTech developments that are currently under development or have been released to market. These developments – because they can be used on mobile phones – mean they will soon be ubiquitous across consumer groups, while also improving the customer experience and driving profit for businesses.

We have news from across the globe this month, as nations and regions try to reawaken their economies following the Coronavirus outbreak. Naturally, with countries across the world all suffering in a similar manner, the need for digitalisation and more efficient processed within financial services has also reawoken the potential that bank data can have across the world.

There has been no end to discussions in Canada over the introduction of Open Banking, but as we reported last month, it appears that it will appear in Canada from next year. This month, however, the American Financial Data Exchange (FDX) has launched in Canada. A Canadian working group has been formed consisting of a range of major banks such as the Bank of Montreal, FinTech’s such as Plaid, and payment processers like Visa.  Don Cardinal, managing director of FDX, said:

The launch of FDX Canada proves the success of this industry-led initiative to bring leading organizations in the Canadian financial services ecosystem together around a common financial data sharing standard that will protect consumers and business and simplify their banking experiences.

News via betakit, Finextra and interview with Senator Colin Deacon on LinkedIn.

South of the border and some Americans are beginning to have the same thought process that we have outlined above as happening in the UK. If Covid stops people leaving their place of residence, or makes it unlikely for them to travel for business – how does business continue to work? How do people apply for credit, mortgages and more, when they can’t supply physical documents as proof of who they are and what their income is? This month, pymnts.com and the Financial Brand have started to have this very conversation from an American perspective. They both recognise that there was substantial FinTech development happening before Open Banking went live in 2018, but that it is the set parameters and regulations that have given confidence in the system and allowed it to flourish.

There is conflicting experience for Open Banking in Australia this month vis-à-vis our two featured articles.  The first, in Entrepreneur, paints a very rosy picture of how consumers now want all interactions done via their mobile phoned, and so Open Banking will fit perfectly into that culture.   The second, from Innovation Australia, notes that when the Consumer Data Rights, of which Open banking is the major part, went live, there was only Fintech company that had been accredited.  officials in Australia have attributed this to Covid-19, though some commentators have called the accreditation scheme “onerous”. As a result, the Australian Government, has granted a further AUS $20m to support the scheme.

Best of the rest in Open Banking Abroad

We have noted the positivity around Open Banking and bank data above, but is also worth noting that much of the positivity has been reciprocated within the financial sector. Banks, lenders and other financial institutions are only too aware of the challenges that are being placed upon them. They are very much aware of solutions being produced by FinTech’s, and we are witnessing increasing levels of engagement with the major finance houses.   That said, while Open Banking was designed – in part – to level the playing field, the global pandemic has stymied this effort to some considerable effect.  The FT [paywall] has noted that while the big US banks hold 35% of customer deposits, while in the UK, this number is above 50%. Moreover, 80% of all of the government backed loans were distributed by the big four banks in the UK, further cementing their dominance.  At the same time, losses and cuts to valuations have been seen at number of the UK Challenger banks, such as Monzo, Starling and Tide.  So how will banking look like after Covid has gone (or eradicated)? Fintech Futures have outlined their five predictions for the future of payments, highlighting mobile payments and the continued slow death of cash as the two major trends that are being accelerated by the pandemic.   The role played by AI and predictive analytics to better understand customer’s data should also not be overlooked, and this is the main thrust of a second article, also to be found in FinTech Futures. The piece argues that banks have been historically too risk averse and while they think they do understand their customers, they actually do not. They write:

By mining debit card data, they could determine where customers spend money and how the current economic shutdown is changing that spending behavior. They could track life stages to determine what kind of loan or account customers might need next, whether for a wedding, college tuition or debt refinancing.

Best of the rest in finance

We know already that FinTech firms have worked fastidiously in the background to mold their offerings and output for maximum impact in this new Covid world. But at the same time, Covid-19 will also have an impact on FinTech firms. As we all know, for most FinTech’s access to funding and support is one of the critical lifelines that is required to stay afloat. Should this be turned off, many – yet to turn profits – will find it a challenge to stay in business. This month, we have seen the first studies showing the detrimental impact that Covid has had on FinTech firms. As can be expected, though the news is that on the whole funding for FinTech firms has fallen since the pandemic took hold.  A new report from Forrester, and reported in Finextra, states:

It’s now clear: 2020 will be a lean year. At the current pace, investors would need to more than double their investments in the back half of the year to match last year’s funding levels; we see that outcome as unlikely in the current economic climate.

A different report from CB Insights, and reported in the same publication, however, states that a number of “mega-deals” did help to keep the sector afloat.

Best of the rest in FinTech