It didn’t take long for blockchain technology to find its way to the corporate daylight and, to some extent, revolutionize the finance world. With Decentralized Finance (DeFi) becoming more and more mainstream,  the only question is whether it will replace or complement the traditional finance system. 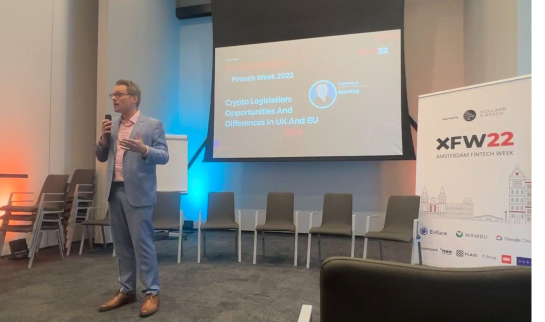 In the previous interview with Ryan King – Head of Business Development at Dusk Network – we covered what the global perspective on decentralized finance regulations is. We invited Ryan back again to dive deeper into the topic and discuss what the effect of European regulation on Markets in Crypto-Assets (MiCA) are, different global perspectives on regulation, and the future of DeFi.

‘It was seen as a trend. But today, even the most critical traditional finance people acknowledge that this is going to be a part of finance going forward.’

People want financial independence and sovereign control over their assets. But in order to satisfy these needs there must be a universal understanding of what DeFi is, and one can’t understand something which is not defined by concrete terms, that is by regulations.

It’s not a secret that the European Commission has been working on regulating cryptocurrencies a bit recently, specifically on MiCA, which will eventually standardize crypto and blockchain regulations across all the EU nations.

‘For most jurisdictions, it will be a gain. Especially for those who don’t really have laws, they’re now being handed a law, which saves a lot of time, energy, and effort. If a crypto or blockchain company is set up in any European country, it can operate in all the other EU countries too. There’s no difference between setting up in Germany or setting up in Malta. Countries can then compete based on the other strong and weak points since the law aspect can be removed. Now it’s like, “Okay, where can we get the best tax rates?” and “Where can we get the best value workforce for our budget?”, “Or the highest salaries for executives?”’

Clarifying the rules of the game for FinTech companies within the EU is not the only thing MiCA is going to impact. Nowadays, finance is more globalized than ever before, therefore MiCA regulations are going to play a significant role in determining what non-EU jurisdictions will do, and how they will engage with and regulate crypto.

‘MiCA is an encouraging step forward and it certainly also opens up the possibility for some countries like Argentina, Brazil, and Colombia. South America often looks to Europe when it’s looking to legislate something new, especially new technologies. This is partly because Europeans operate on what we call a civil or code style of the legal system. And that doesn’t mean the law itself, but it’s more like how the law is implemented, the spirit of the law, and how it operates. And so since South America and the European Union operate on the same sort of law, there’s a lot of interest down there in MiCA as they look to regulate it.

This is a piece of legislation they could effectively just copy and change the name on,  whereas anything being written in the United States is essentially irrelevant to them. If South American countries were to basically integrate MiCA, but with some slight edits, then it would be a lot easier for European companies to take part in business down there because they would be working to the same standards. So it’s interesting because economically speaking, the US is such a huge partner to South America in terms of trade, but when it comes to writing legislation, they very much look to Europe. And I would say, the gap between Europe and South America is narrowing, while the gap between Europe and the US seems to me to be still widening if anything.’

But just like welcoming a new next-door neighbor, stating the rules will not automatically lead you to the best friendships. So while we finally see some acknowledgment by governments and a more rational and balanced perspective towards DeFi, there is still a lot of conceptual groundwork that needs to be made in order to smoothly integrate DeFi into our financial habits.

‘The big question that I think will need to be handled over the next five years is how to bring DeFi crypto investors, and crypto holders into the traditional finance space. People who’ve made money in crypto and DeFi, who would like to have a less volatile, more stable set of assets, maybe some securities or a government bond, and who would like to diversify their portfolio. These people are sitting there, they’ve got a lot of assets, they’ve got a lot of money.

There’s too much pushing and pulling to pretend that we can keep this invisible wall between these two types of finance. I don’t think the wall can withstand that, so it’s going to be a lot better for governments to acknowledge that they can be in control of taking the wall down and managing those connections. I think there’s a lot of willingness on both sides to bring these two RegFi and DeFi circles together into something like a UniFi and that is going to have to be a consequence of a grand bargain, over the next five years. But I think it’ll get done. I do.’

So, how can traditional institutions and new blockchain technologies work together and prepare for the walls to come down?

From Dusk’s perspective, governments need to clarify regulation so that DeFi organizations know what the rules are, while DeFi needs to become compliant so that it can interact with the economy at large, not just the crypto-space.

‘With a clear regulatory framework, compliant DeFi organizations will acquire the capability to escape the sandbox of crypto assets and finally integrate with the larger financial sector. At that point, we will see the dawn of a harmonized financial landscape, where blockchain technology shall power both the technological core of traditional institutions as well as an emerging breed of “DeFi services”’

That is what Dusk is building. A blockchain that is compliant with European regulations, while still preserving the decentralization and self-sovereignty that underpin DeFi.

Dusk Network is the privacy blockchain for financial applications. A new standard for compliance, control, and collaboration. Our mission is to enable any size enterprise to collaborate at scale, meet compliance requirements and ensure that personal and transaction data remains confidential.